Chocolate Lovers, Watch @ Your Own Risk

Chocolate Lovers, Watch @ Your Own Risk 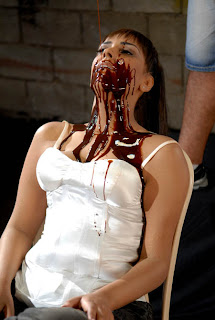 As a chocoholic I thought I would have to live with my addiction to chocolate for eternity. I have tried many times to quit my passion to this tasty and mysterious treat, but I have failed. I am delighted to report that I have found an alternative to chocolate rehab—which is really a business by the way As you should know by now, the Arab world never runs out of two things, worthy causes and shoddy music videos. Rouwaida El Mahroqe has managed to combine both — the worthy cause being my own chocolate addiction. To watch the video at your own risk click here Rouwaida El Mahroqe, an Emirate singer, has done more than any 12 step program could to help me beat my dark chocolate fixation. She released a new music video clip to promote her newly released album Ay Ay (a more proper title for a low-budget Mexican porno). 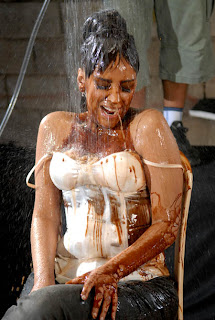 The video opens with the singer being showering in liquid chocolate. I never thought I would gag at the sweet sight of melted chocolate. The image of chocolate dripping on her body is quite scary. Word on the Arab street that she had it that El Mahroqe wanted to be “the Queen of Chocolate.” The Mrs. Wonka-wannebe has not considered how her audience receives the music video. Chocolate-lovers like me are shocked and offended. Protests raged across the region (kind of). Prince Al waleed persoanly asked his company Rotana to can the music video because of the racy chocolate scene. The music video however, will continue to taunt and seduce fat boys around the region. In the meantime the video director will be making another video in the near future in which he will take on pizza and donuts addiction. On a serious note, Rouwaida (aka Rou-Weird-a) if you want to expose yourself with seductive dirtiness, be my guest, but please do not fiddle around with my favorite ingredient. I could think of many other foods you could have used to the same effect: honey, laban, foul mdammas, tahini sauce, liquified lamb fat, kosheri, etc. Tarboush Tip: Will