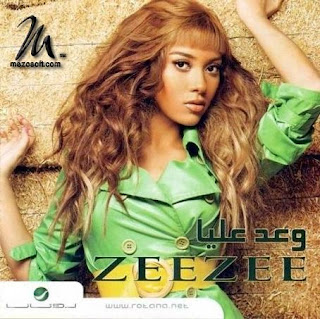 ZeeZee Adel, Arabic pop newest sensation has released a album that only promises a bright future for both the artists and her fans. After too many Arabic pop albums bored even its most loyal of fans, I find ZeeZee’s performance refreshing. ZeeZee not only breaks down new barriers for Arab female artists, but more importantly, it’s just a pleasure to listen to her songs. Past female music videos have portrayed them as either uptight one-dimensional characters or promiscuous dolls. ZeeZee introduces us to a new type; the funky gal. I’d be damned if I did not compliment her rather exotic look and also the awesome album cover. ZeeZee’s new marvel is largely an enjoyable record that gives as much attention to melody as creativity and marketing. However, the dozen tracks on “Waa’d Alya” offer more in the way of groove and texture than they do in emotions. I maintain that the difference between a mediocre Arabic pop album and a grand one tends to be the music video. Yes, some parts are cheesy, but overall, I think the music video suits the funky lyrics. Here is the music video. [youtube=http://www.youtube.com/watch?v=i51L6M7dVjY]