The Party Goes On…At Least for Some

The Party Goes On…At Least for Some 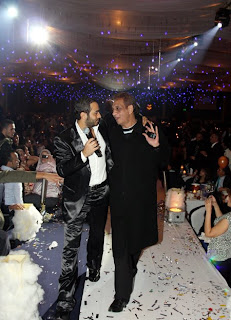 Let’s party like it’s 1993! Ain’t no partying when Israel attacks. Due to the horrific situation in the Gaza Strip, many concerts have been canceled or at best scaled back. Both Jordan and Cairo canceled the biggest New Year Concerts. Dubai scaled back on the concerts, Abu Dhabi could care less. A number of facebook groups have called for the boycott of such concerts at this desperate time. Egypt: Cancled Nawal Zoghbi (Lebanese), Rami Sabri (Egyptian), and Assi Hilani concerts that were to be broadcasted live on the National TV. Bahrain: Kathem El Saher canceled his much awaited concert Jordan: canceled two high profile concerts with Melham Barakat and Rolla Saad. Lebanon, Syria: parties go one, but they banned journalist from going in. Turkey: Canceled a great deal of the festivity for the New Year in solidarity with the Palestinian people. UAE: Abu Dhabi had a large concert with Shakira (Colombian), no changes to plans. Dubai, Amr Diab held his concerts as promised. His concert actually was canceled; word has it that he appealed Prince Moe for a permit, Diab said he will be donating his fee to the Palestinian Red Crescent. Amal Hijazi, the Lebanese starlet held her concert as well However, Nancy Ajram (Lebanese), Mohamd Abdo (Saudi) and Kathem El Saher (Iraqi)concerts were called off. Algeria: Saber Riba’I, Tunisian super star has called off his Sheraton concert Latifa and Asalah: both solid female Arabs singers canceled all their public engagements in soliderty with the residence of Gaza. Jannat: a rising Moroccan singer that took the Arab world by storm, held her concert in the intercontinental hotel in Egypt. Assi Hilani and Dina Hayek participated in the same concert and ensured no photography. Tamer Hosny: Egypt’s bad boy and hit maker held his concert as promised in the سميراميس hotel. His performance lasted 3 hours! Many Arab Stars world are torn between supporting Gaza and fulfilling their contract to avoid paying hefty fees. Others may just care less. All I know is that we can praise those who took this symbolic step, as small as it is. P.S. As expected when Arab get killed, Arabs singers write them songs. This latest song for the latest developments in Palestine by Egyptian mega Star, Tamer Hosny titled Mosh ‘Arif A’amil Haga “I do not know what to do” [youtube=http://www.youtube.com/watch?v=rWPoho2JplU]