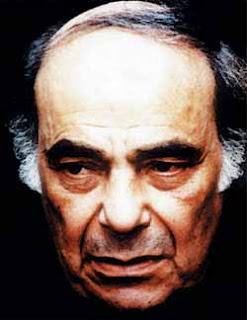 Mansour Rahbani, legendary Lebanese music mogul and Lebanese singing diva Fairouz’s brother-in-law passed away yesterday on his hospital bed after three days of being in the ICU. He died of pneumonia. Born in 1925, Mansour formed a golden triangle with his brother Assi and Assi’s wife, Fairouz where they collaborated on several musical endeavors some of which included movie, musicals and songs which impacted the Middle East like no other. It’s safe to say that without this golden trio, the music of Lebanese (and of the Arab world for that matter) would never have been be the same. The Rahbani brothers, it could be said, were the creative genius behind the transition of Lebanese music from a silver age and on into a golden one. Before beginning his career as a song writer and lyricist, Mansour pursued training as a police officer. It was upon completing his formal training that he really became involved in music. It was this interest which eventually led him to join his brother Assi in the mid-1940’s who was working in the Broadcasting industry of Lebanon. Like many in the Middle East, the work of the Rahbani brothers soon became more and more political, particularly after the defeat of the so-called “Arab armies” in the June 1967 war. The Rahbani Brothers soon began harmonizing chords and tailoring powerful lyrics that focused on and connected a people to its land, to its wonderful heritage, and taught them to hope for a better and brighter future in every word of every verse. Palestine of course had its fair share of devotion and attention. “Zahrat Almada’in,” (the Flower of Cities) “Sanarji’a Yawman”, (Someday we shall return) and other famous compositions can be added to the list of songs written in honor of Palestine. Among other timeless hits are “Bahibik Ya Lebanon,” “Habeytak Fii Seyf,” and “Saloony Elnas.” Fairouz and the Rahbani brothers went their separate ways in 1979 when the brothers decided to start a new phase of their work with other female singers while Fairouz determined to turn her attention and to focus on her son, composer Ziyad Rahbani. Their style has been famous for fusing traditional Andalusian music with Arabic rhythms, Lebanese Folk music in addition to blending these with a Classical Western Music style. Mansour Rahbani also made a several movies and composed scores of songs that are timeless classics in the Arabic musical library. One of his most well-known works in the West is his work in turning Gibran Khalil Gibran’s novel “The Prophet” into a musical. The Rahbani brothers’ work was not limited to older generations. Their work also featured a number of pop artists. Mansour collaborated with Latifah when the two came together for the production of Mansour’s play entitled “Hokim ElRo’yan.” He and Carol Semahe decided to work when putting on another one of his plays entitled “Zanoobia.” For brothers who grew up poor and managed to accomplish what they accomplished, their’s is an amazing life story. His latest play entitled “The Return of the Phoenix” is usually a sold out show. If your happen to be Beirut, check it out at the Casino Lebanon Theater if you can get a ticket. The accolades began pouring in as news of his passing spread. “Assi and Mansour made Arabic and Lebanese music belong to the modern world and they composed poetry that transcended the time period in which they were born,” Akl Aweet, poet and culture editor for the Lebanese daily An-Nahar, told AFP. “We have lost the last of the great ones,” remarked Lebanese poet and playwright Paul Shawul. “Mansour has joined his second half, Assi,” who died in 1986. The Rahbani brothers did to Arabic music what the Farrelly brothers, the Wachowski Brothers, the Coen Brothers did to their respective genres. [Tarboush Tip: Sibawahi, Fayyad]

From The Opera House To The World @yasminalioffici Is A Delight! →