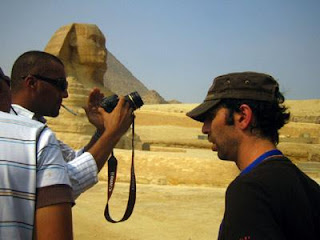 Said El Marouk, the Lebanese director known for his creative and visionary work on Arabic music videos is now moving up in the world of entertainment. He directed videos for Nancy Ajram, Fadel Shakir, Elissa, Najwa Karam, Magda El Rumy and others, but it moving into the big-time now. El Marouk just got a new gig working on Transformers 2. He will be serving as a second unit director as well as providing artistic consultation — which counts like he will do more than make coffee and buff the machinery. El Marouk will be working under Michael Bay, the director of the film, providing assistance to the film crew and taking charge of filming the scenes in Egypt. El Marouk will film scenes in the desert, near Abu el Hool the sphinx and the pyramids. Maybe he can get me the role of “Kousheri stand employee #2.” El Marouk’s latest music video came out couple of days ago. Najwa Karam’s Ta’a Khabeek is an action-packed music video and represents the body of work which may have attacted big bucks Hollywood. [youtube=http://www.youtube.com/watch?v=JEBUXHaJiYo] It’s worth mentioning that El Marouk may be making the same transtion as Michael Bay, moving from music videos to directing movies. [Tarboush Tip: Will]

From The Opera House To The World @yasminalioffici Is A Delight! →